'Madison left the room and the precinct. It was chilly as hell outside and she strode away, shaking off the men with their sharp suits and cheap words. Salvo’s suit had been just as sharp – and look where it got him.' 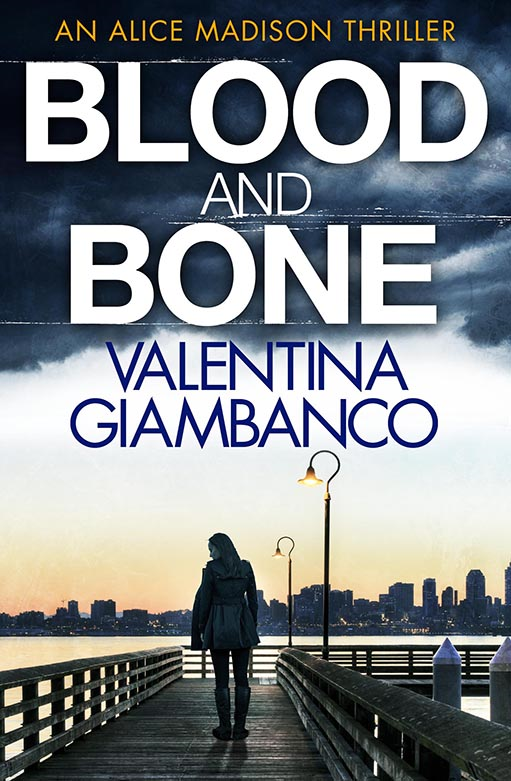 After two years in the Seattle Police Homicide Unit, Detective Alice Madison seems to have found the kind of peace in her personal and professional life that she has not known before.

When an ordinary burglary turns into a horrific murder she is put in charge of the investigation and finds herself tracking a killer whose pleasure it is to destroy his victims.

The DNA from a single strand of hair leads Madison and her partner Detective Sergeant Kevin Brown to a series of old cases and she realizes that she might be hunting a killer who has been stalking the city for years and whose existence is the stuff of myth in high-security prisons. A killer who might still be at large because Brown made a mistake seven years earlier.

Madison’s own past comes under scrutiny when Internal Affairs officers begin to investigate her and she realises that enemies close to home want her to fail.  In the middle of the storm Madison and her partner must hunt down a skillful, determined murderer with a talent for death.  And Madison’s private life and fragile peace fall apart.

The nightclub sat a little off the main road, surrounded by trees on one side and a warehouse on the other.  It was almost eleven and the parking lot was full.  The music – a series of 80s classics – had found its way out of the squat building and low thumping pulsed in the chilly air.

Two men sat in a gray Mazda with the engine running and the heating turned high.  They had been parked for half an hour, waiting.  They already knew when they drove there that the club would be closed for a private event – a bachelor party – and still they sat in their car, drinking and smoking in silence. The waiting felt almost as good as what was to come later; it gave their enterprise the guise of a hunt.

The club door opened, spilling orange light on the wet concrete with a blast of U2, and a woman walked out.  One of the men wiped the condensation on the windscreen with his sleeve to better look at her.  His eyes tracked her long strides as she reached an SUV.

‘Here we go,’ he said and he pulled the handle to get out of the car.

Alice Madison felt the bite of the air and it was a relief after the heavy warmth and the alcohol fumes inside.  Her Land Rover Freelander was parked close by and she was rummaging in the back seat when she heard car doors opening and closing behind her and steps approaching.

Madison turned.  ‘Hello,’ she replied.  Two men stood a few yards away; she didn’t recognize either of them.

‘Yes,’ Madison replied and knew instantly that they were not guests: they were two guys in their late 20s – only a handful of years younger than she was – who wanted to make conversation with a stranger in a parking lot and who would definitely blow a 0.1 if breathalysed.

‘Do you work in the club?’ The man continued. ‘I’ve been here before but I’ve never seen you, and I’d sure remember someone as cute as you.’  He grinned and it was neither friendly nor pretty.

His friend giggled and darted a look at the lot.  No one else was about.  Madison clocked him doing it.

‘No, I don’t work here,’ she said, polite but that was all the chat they were going to get from her, and she closed the car door.  The plastic bag in her hand was wrapped around a DVD case; she had found what she wanted and it was time to go back inside.  The men stood between her and the club door.

‘If you’re not a waitress then you must be the entertainment.’ The taller man said and he looked her up and down. There was a nasty slick behind the words and Madison smelled rank sweat and beer in the cold November air.

She took measure of them: white, six foot tall or thereabouts, built and dressed like they did their running in gyms and their fighting on the Xbox.   Had they been drinking in their car, waiting for the right person to leave the club?

‘Gentlemen, I heartily recommend that you ask the staff inside to call you a taxi to take you back wherever you’ve come from,’ she said and moved forward but they blocked her path.  The shorter one opened his mouth and his voice was reedy and too high for someone his size.  ‘I don’t think she likes you,’ he told his friend.

Madison sighed.  ‘You’re having a really bad night, you just don’t know it yet.  Go home, before you do something stupid.’

Their smiles went away. They were somewhere between tipsy and drunk and yet lucid enough to understand that for some reason the woman in front of them was neither charmed nor intimidated by their efforts.

This is going to go one of two ways.  Madison squared up to them – hoping they were smarter than they looked but ready in case they were just as dumb as she thought.

‘We only wanted to make friends, you prissy little bitch,’ the tall one said quietly as he stepped forward.

Madison stood still.  He had a few inches on her and clearly believed that it would be enough.

Enough for what, Madison asked herself.

‘You’ve just done a show for the party, I think you should do one for us too,’ he continued.

Three people in a parking lot.  Many cars but nobody else within earshot.  Madison did not want to feel over-confident: there were two of them and only one of her, and cocky is what gets you into trouble.  She was dimly aware of the familiar weight around her ankle. ‘Have you done this before?’  She asked the one who seemed to be the leader.  The small pulse of her anger was like a ping on a radar.

‘This.  Have you ever approached women and hit on them and been a complete asshole?’

‘Is this what you do on a Friday night?  Is this where you come and look for your next meaningful relationship?’

Madison tried to step on her temper but it didn’t work. ‘I’ll speak more slowly for you.  Is this the first time you approach a woman in a nightclub parking lot? It isn’t, is it?  Have you and Wonder Boy here ever managed to get one cornered? Have you ever actually managed to convince one to come back with you? What happened then?’

‘All we wanted was to be friendly and offer you some extra work. Would have paid you for it too.  Do you think you’re too good for us?’

He was wide in the shoulders and the dark threat in his voice came easy to him.  Madison could have ended it there and then; she could have told them her name and job title.  All they had was bluster and the illusion of muscle and her words would have stopped them dead.  She gazed from one to the other.  She was not afraid, no.  Next to her average work day they were merely an annoyance.  Nevertheless, Madison considered, there they were, trying to chat her up and bully her at the same time.  And so she did not speak; she breathed deeply feeling a reckless calm that rested on her anger.  She knew the taller one would move first.

‘Do you think you’re too good for us?’ He repeated.

‘You have a chance to do the smart thing and walk away now,’ she replied.

‘Why would I want to do that?’

‘Because when you look back on this evening you will feel either very smart or very foolish depending on what you’re going to do next.  Quite frankly, I don’t care either way, but it would save us both a lot of time if you called for a taxi and went home.’

‘Shut up,’ the tall man hissed and his right hand went for Madison’s arm.   Snake fast she took hold of his wrist and with a quick twist she had it in a lock – the DVD dropped on the ground.  Her other hand went to the back of the man’s neck and she grabbed him and pushed him down.  Now his arm was extended painfully high behind him and the slightest pressure from Madison made him yelp.

The friend moved forward and her voice snapped him out of it.

‘You move an inch and I break your friend’s arm.’

‘Happy now?’ She asked them.

The shorter man shifted his weight, raised his hands and leant forward.  ‘Hey,’ he said.

‘Stop moving!’ The tall one shouted to his pal with a yelp. ‘Just fucking stop moving.’

The man froze where he was.  This was new, this was not something they had planned for.  His mouth hung open.  Madison let them appreciate the situation for a moment then she let go of the man’s neck and her hand went inside her blazer; her badge caught the light from the club’s neon sign.

‘Seattle Police Department. You, close your mouth and lie down on ground, hands behind your head. You too,’ she addressed the taller man. ‘I’m letting your arm go, mind you don’t fall forward on your face. There you go. Easy.  My name is Detective Alice Madison, SPD Homicide.’

The taller man stepped forward, almost slipped and caught himself.  He looked up at her and somehow his world had tilted on his axis.  Madison saw it his eyes: two minutes ago he was about to take a woman home for some Friday night fun and now he was sprawled on the concrete staring at a detective’s badge.  Life was not fair.

‘It’s a cop’s bachelor party,’ she said. ‘Every single car in this lot belongs to a cop.’

She wanted to say something like you crashed the wrong party, guys but it felt crass.  There was the real possibility that these two morons had coerced women to go back to their place and do God-knows-what.  Some might have followed them because it was easier than getting into a fight if all they wanted was a lap-dance.  Was it though?

Madison had to call dispatch, get a patrol car over and give a statement.  She was pleased that she was stone cold sober.

It started to rain and big fat drops smacked on the ground.

‘Stay right where you are, fellas,’ she said; one of the waiters had come out for a breath of fresh air and she waved him over.

‘If it’s a bachelor party,’ the shorter one muttered under his breath. ‘What the hell are you doing there anyway?’

At the far end of the club wall, invisible in the shadows under the low hanging roof, Detective Chris Kelly stomped his cigarette into the ground. For a moment there things had gotten interesting; for a moment it looked like Madison might have been in trouble.  It hadn’t lasted long but it had been the highlight of his evening.

‘As twisty and tasty a crime thriller as anyone could wish for. Madison is a sensitively drawn, fully rounded character, ensuring this compelling mystery stands out from the crowd and gives the reader a heroine to cheer for when the body count mounts.’

Hardback published by Quercus in the U.K. in September 2015, paperback due Summer/Early Autumn 2016.

You can buy BLOOD AND BONE at your local bookshop. The Booksellers Association can find the nearest one for you. You can also buy from: